Presidential candidate; Senator Barack Obama’s campaign has made incredible use of virtual media.  Obama already has a group of followers on ‘Second Life’, He is connected to people through his website, all their campaign events have been streamed live on his site; they use Twitter to keep people informed about them. Recently the campaign launched an iPhone application ‘Obama 08’ – and they’re not done yet. 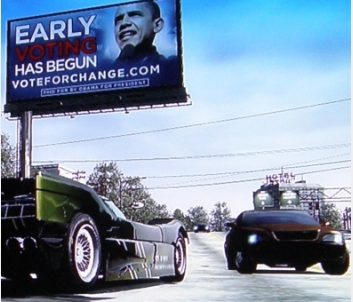 The Obama campaign is now advertising in a very popular video game for the Xbox 360. Obama campaign has bought ad space within video games including Electronic Arts’ “Burnout Paradise”. One in-game ad, seen on a virtual billboard in the racing game, informs gamers that “Early Voting Has Begun” for the election, and includes a link to an Obama website.

Electronic Arts confirmed to GameSpot (a very popular gaming site) that the ads have been appearing on virtual Obama billboards since October 6, and will continue to run until election day in November.

According to the Seattle Times, the ads were sold by Massive, a Microsoft-owned ad agency (Microsoft makes the X-box, for the non-gamers here). The ads are also highly targeted and are only visible to gamers in the battleground states of Colorado, Florida, Iowa, Indiana, Montana, North Carolina, New Mexico, Nevada, Ohio and Wisconsin.

In a report on GigaOM,  Holly Rockwood, director of corporate communications at Electronic Arts, told GigaOM. She adds, “Like most television, radio and print outlets, we accept advertising from credible political candidates,” she continued. “Like political spots on the television networks, these ads do not reflect the political policies of EA or the opinions of its development teams.”

In my earlier post I spoke about Google leveraging this medium & future of in-game advertising, but for a political campaign to be savvy enough to realize this opportunity exists and take advantage of it is really impressive. To my knowledge, this Burnout ad is far and away the most prominent use of a major online game to promote a presidential candidate’s campaign.

Now that Obama has entered this periphery! I really believe that we will see more in-game advertising  & effective use of virtual media in next presidential elections. However, the challenges in this periphery will be very game-specific:  advertising message will have to blend with the game & avoid falling into those obviously loud marketing tactics.  Last thing a gamer wants is, an intrusion of marketers in their me-my time with their hobby time. If the advertising message is communicated in a clever & non-intrusive manner, the message will be received positively.